Order pick-ups are currently not available. 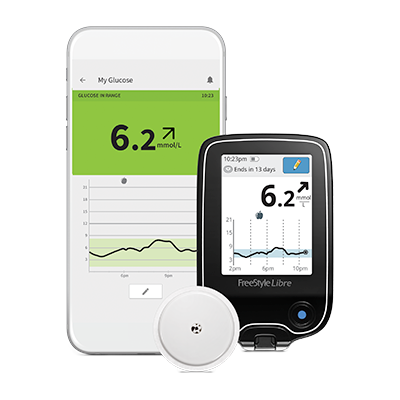 1. The FreeStyle LibreLink app is only compatible with certain mobile devices and operating systems. Please check our compatibility guide for more information about device compatibility before using the app.

3. Transfer of glucose data between applications depends on mobile connectivity.

1. LibreView is developed and distributed by Newyu, Inc.LibreView, a product of Newyu, is supported on Windows and Mac-operating computers. Minimum system requirements for operating systems are Windows 7 or higher on Windows computers and Mac OS X Yosemite (10.10) or higher on Mac computers. Minimum system requirements for browsers are IE10 or higher, Chrome 37 or higher, Firefox 32 or higher, and Safari 8 or higher. It is recommended to use the latest version of your browser. LibreView can be viewed on iOS 6 or higher mobile devices.